It ain't over yet for Colin Kaepernick ... so says NFL commish Roger Goodell who says he thinks the QB will get another shot to make an NFL roster.

Goodell appeared on FS1's 'First Things First' and was asked straight-up if he was "troubled" by the fact Colin's not on a roster while other QB's like Joe Webb have jobs.

"I want to see everyone get an opportunity, including Colin," Goodell said ... "but those decisions are made by football people."

"I don't make those decisions. I'm not a football expert." 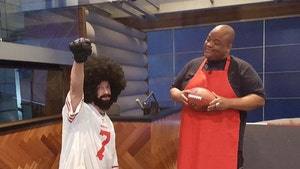