LeBron James just smashed all rumors about the Cavs not liking Khloe Kardashian -- because he gave her a big ol' bear hug after a night out with her in L.A. and TMZ Sports has the video.

LeBron hit up Halloween Horror Nights at Universal Studios on Friday with teammate Tristan Thompson and his girlfriend, Khloe K.

Witnesses at the park say Kourtney Kardashian and Russell Westbrook were also there -- but you don't see them in the video.

After the big night out, the group said their goodbyes at the valet stand -- with LeBron and Tristan sharing one of their famous dancing handshakes before going their separate ways.

The funniest part of the video ... the group of theme park goers who shot the video were way more starstruck by Khloe than King James! 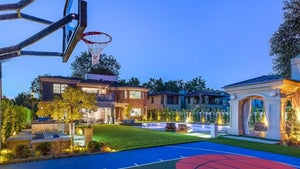