Tyron Woodley says a showdown with Nate Diaz at UFC 219 is "50% complete" -- and the only thing that's holding it up is "scared" Nate Diaz.

"All you gotta say is 'Yes,'" Tyron said in a message to Nate on "The Hollywood Beatdown" show ... "Put the ink to the paper and we done."

Tyron says he's ready and training for the Dec. 30 fight in Vegas ... and says he honestly believes Nate is scared to fight him.

"Guys in our sport bump their gums quite a bit and they get you to think they're these huge tough guys ... they're these gangsters that they'll fight anybody, anytime."

"And then when you get in front of a person like me ... the crickets start to come out. They don't really wanna fight."

"Now it's happening with baby brother [Nate] so I guess it's in the bloodline."

There will be a LOT more tomorrow when the full episode of "The Hollywood Beatdown" drops on the TMZ Sports YouTube page. 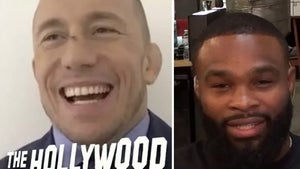