One of the 3 actresses busted at Houston's firmly believes her skin color played a role in the aggressive way the security guard took her down, and she says the restaurant's track record proves it.

Brittany Marie Lucio tells us Houston's and cops are lying about what went down before she and her friends got dragged out of the Atlanta restaurant and put in handcuffs. She takes serious issue with what she believes was excessive force used to remove them.

One of the friends, Asia'h Epperson, told us she was shocked cops arrested them instead of the security guard. Ditto for Brittany, who said she's fully aware of the issues that prompted T.I. to boycott a different Atlanta-area Houston's last year.

As we reported, T.I.'s now on a mission to shut down Houston's nationwide, by any means necessary.

Brittany told us why his support is invaluable, and added there's gonna be a lot more that comes out about this incident ... most likely in court. 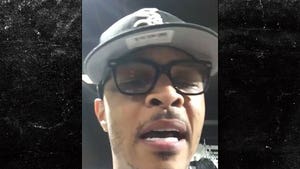