Floyd Mayweather isn't ALL smiles over his top rank on Forbes' highest paid athletes list this year ... telling TMZ Sports he shoulda been technically No. 1 AND No. 4!!

"Conor's at No. 4 because of me," Floyd said of the UFC superstar he boxed back in August.

The shade over the Irish fighter didn't stop there -- especially when we asked if he thinks Conor can ever get to his No. 1 spot.

"Absolutely not. Conor McGregor can never get to No. 1 without Floyd Mayweather."

For the record ... Forbes credited Floyd with making $285 mil the last 12 months, and Conor with $99 mil. Their respective purses from their monster summer fight were estimated to be around $200 mil and $70 mil ... so Floyd might have a point.

As for what he did to celebrate being top dog ... Floyd wouldn't say -- though he WAS eager to show our camera guy some of his insanely expensive whips.

Floyd Mayweather Balls Out In Mexico For Sister's Wedding 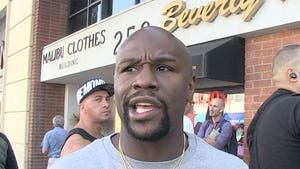