George Clooney struggled to board his private jet, showing clear signs of injuries after his scary scooter crash.

George, Amal and their twins got outta Dodge 2 days after the crash. It's clear George is hurting, which is no surprise ... as we reported, he slammed into a car in Sardinia going 60 mph, crashing into the windshield and causing it to shatter ... then got hurled into the air before plummeting to the ground.

Frankly, it's kinda miraculous he's not still laid up in the hospital. He was there only a few hours before being released.

He's in the middle of shooting "Catch-22," which will reportedly resume filming in Rome. What's unclear ... whether Clooney is going to take some time off to heal before returning to the set. 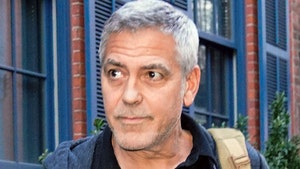