Bow Wow and his GF were in a knock-down, drag-out brawl before they both got arrested ... according to cops.

Kiyomi Leslie Holden called Atlanta PD around 4 AM Saturday to report Bow Wow for assault. She told officers on the scene the whole fight started when they got home from a party. Kiyomi Leslie -- who appears on "Growing Up Hip Hop" -- claims Bow Wow was pissed she was talking to another man at the party, and lit into her about it when they got home.

In the police report, obtained by TMZ, Kiyomi Leslie says Bow Wow hit her in the head, pulled her by the hair, dragged her from her bedroom ... and told her to get the hell out.

For his part, Bow Wow acknowledged being pissed about the other guy ... telling cops she "disrespected him" by hanging "all over another man's body." He claims Kiyomi Leslie called him a "bitch ass n***er" when he complained about her behavior.

He claims he merely told Leslie to leave their home, and placed her bags by the door. He claims Kiyomi Leslie "grabbed a night stand lamp and threw it at him." He says she missed with the lamp, but scratched the hell out of his face ... which is obvious in his mug shot.

An officer on the scene says he saw the lamp on the ground when he entered the bedroom. Cops observed red marks on Kiyomi Leslie's fingers as well as broken fingernails.

TMZ broke the story ... Bow Wow and Kiyomi Leslie were arrested and booked for battery. Kiyomi Leslie says she broke 3 ribs during the brawl. 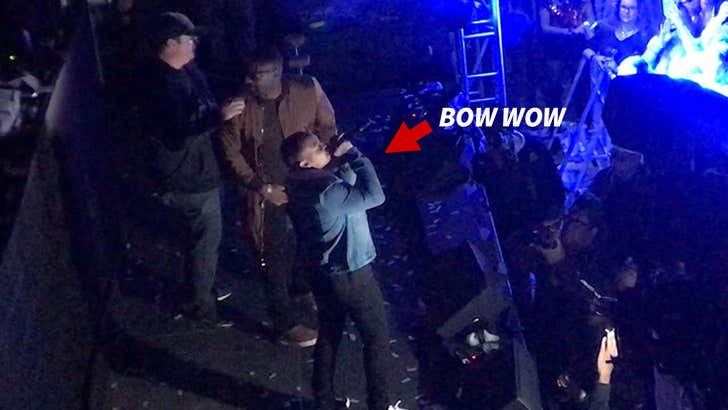