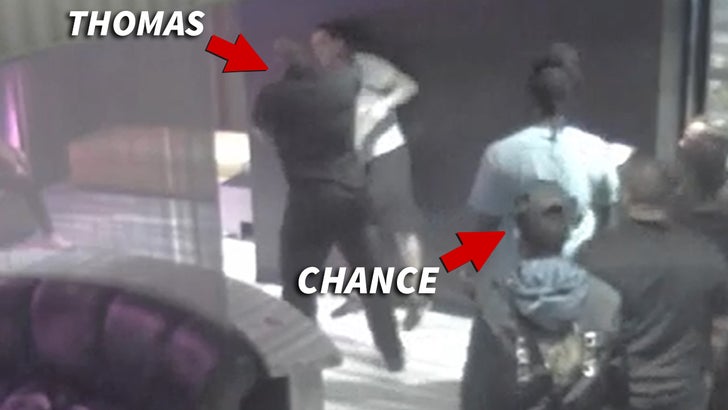 Chance the Rapper's bodyguard allegedly unleashed a can of whoop-ass -- caught on surveillance video -- and now the guy on the receiving end is suing.

Travis Montgomery is suing the rapper's muscle, claiming Star Thomas beat the hell outta him in August 2017 after a verbal exchange inside the lobby of the W Hotel in Chicago. Montgomery says the incident was even more violent considering Thomas's size ... 6 foot 4 and about 300 pounds, according to the suit.

In the docs, obtained by TMZ, Montgomery says Thomas had blocked him from jumping inside an elevator earlier in the day, because Chance was aboard. Montgomery says he ran into Chance's entourage again later in the day -- and that's when things got violent in the lobby.

Montgomery claims Thomas grabbed him by the neck, pushed him violently into a wall and held him by his neck, choking him. You can see it all play out in the video.

As we first reported ... cops were called to the scene and Thomas was booked for misdemeanor simple battery. Montgomery, who's hired attorney Tim Tomasik ... also has beef with the hotel for having inadequate security.

He's suing the W and Thomas for damages.