Beto O'Rourke is sick and tired of being asked if President Trump is racist ... and now he's ripping into the media for asking about something he feels is blatantly obvious to everyone.

The former Congressman from Texas, Presidential candidate and El Paso native was on MSNBC Monday morning, and blew a gasket while conveying his frustration following 2 mass shootings that left at least 29 dead.

Beto didn't hold back, saying, "Anyone who is surprised is part of this problem right now, including members of the media who ask, 'Hey Beto, do you think the president is racist?' Well, Jesus Christ, of course he's racist! He's been racist from before Day 1 when he was questioning whether Barack Obama was born in the United States."

The ex-Congressman had also lashed out at the media on Sunday ... using even more colorful language.

"Members of the press, what the fuck?" Beto O'Rourke and all of us. pic.twitter.com/hJNSBsPUmA

Beto's rant comes just 2 days after the majority-Hispanic city he used to represent came under fire from the 21-year-old gunman who stormed into a crowded Walmart and killed at least 20 people. The suspect wrote an anti-immigrant manifesto that echoes Trump's language and views about immigrants.

For what it's worth ... Trump partly blamed the shooting on video games. 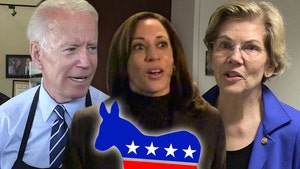