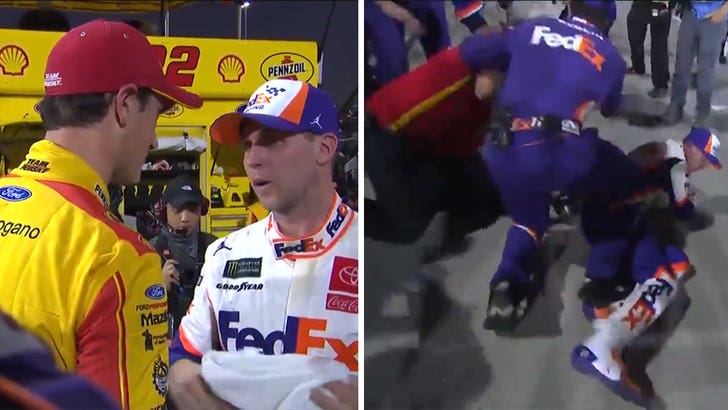 The guy who threw down NASCAR superstar Denny Hamlin during a brawl with Joey Logano on Sunday was just suspended 1 race by the league ... officials announced Monday.

If ya missed it ... Hamlin and Logano really got into it at Martinsville Speedway over the weekend -- carrying some on-track drama onto pit road.

The two stars were discussing their in-race driving ... when all of a sudden Logano gave a hard shove to Hamlin's shoulder.

That's when Denny went after Joey ... and all hell broke loose -- with both of the drivers' pit crews hopping into the melee.

But, before Denny could get his hands on Logano ... one of Joey's pit crewmember grabbed Denny by the neck and threw him to the ground!!!

Denny was pissed ... but the brawl was quickly calmed down by NASCAR officials.

On Monday, the league handed down punishment for the fight ... banning Logano's pit crew member -- tire technician Dave Nichols Jr. -- for one race for his role in grabbing Hamlin.

As for the rest of the guys involved in the fracas, seems NASCAR has let them all off with a warning.

It's a pretty big deal for Logano to be down a man next week ... there are only two races remaining in this round of the playoffs -- and Logano's fighting HARD for a spot in the next round. 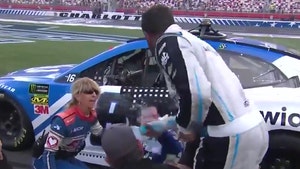