Kobe Bryant's high school will honor the NBA star with a 33 second moment of silence at Tuesday night's basketball games ... to honor the man who used to wear #33.

A rep for Lower Merion High School in the Philadelphia area tells us the boys and girls varsity teams will take on Upper Darby High at the Kobe Bryant Gymnasium starting at 7 PM.

This is the first home game for the LMHS Aces since Kobe's death -- and school officials plan to address the community before the games tip-off.

"Principal Sean Hughes will read a statement on behalf of the school community. The statement will be followed by 33 seconds of silence, as 33 was the number worn by Mr. Bryant when he was an LM Aces player."

School officials ultimately decided NOT to cancel the games because they believe Kobe would WANT the players to compete.

In fact, head basketball coach Gregg Downer met with the players in private on Monday and said -- "Kobe would want the balls bouncing, the sneakers squeaking and you doing what he loved and what you love."

After his stellar high school career, Kobe went straight to the pros -- drafted 13th overall in the 1996 NBA Draft.

Kobe's #33 high school jersey was retired by Lower Merion in 2002 at a ceremony attended by his parents, teachers and even Shaquille O'Neal. 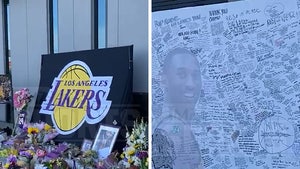