NHL star Jay Bouwmeester is speaking publicly for the first time since he collapsed from a cardiac episode during a game last week ... saying he's now "on the road to recovery."

"My wife and daughters are forever grateful for everyone's support," Bouwmeester said Tuesday, "and we will continue to have a positive outlook for our future."

It's an amazing update from the 36-year-old ... considering his dire situation during the Blues-Ducks game on Feb. 11.

Jay passed out on the team's bench during the first period of the game -- and GM Dave Armstrong revealed doctors needed to use a defibrillator on the scene to revive him.

Bouwmeester was rushed to a Southern California hospital ... where he later had surgery to place an Implantable Cardioverter Defibrillator (ICD) in his chest to prevent future issues.

In his first public statement since it all went down, Jay said he's recovering nicely ... and thanked everyone for their well wishes.

"I would sincerely like to thank all of the trainers from both the St. Louis Blues and Anaheim Ducks, as well as, all of the first responders, the Anaheim medical staff and the team at the UCI Medical Center for their quick actions on Feb. 11."

Jay continued, "Our family has felt the support of the entire National Hockey League family and the city of St. Louis during this time. We have all been greatly comforted by your genuine concern."

"On Sunday evening, I returned to St. Louis and I am on the road to recovery." 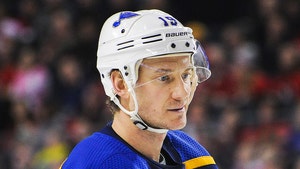 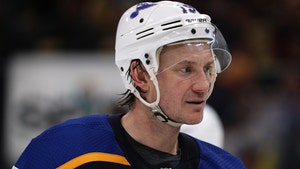