Jorge Nava is throwing in the towel on his "90 Day Fiance" marriage to Anfisa Arkhipchenko ... now that he's getting outta prison with a whole new fit bod!!!

Nava was a big hit during season 4 of the show, but he's currently incarcerated on drug charges. He tells TMZ it's over with his Russian bride, and once he's released later this year, he plans to make it official with divorce papers.

So, what went wrong? Aside from him being in prison?? Jorge claims Anfisa abandoned him while he's been doing time, and ran off to be with another guy.

He says they maintained a relationship for a brief period when he first got busted in 2018 for having hundreds of pounds of weed -- but since then, they've gone their separate ways.

Jorge's supposed to get out in May, but he's worried the coronavirus pandemic could delay the process. Whenever he gets out, he's set on getting divorced ASAP. Anfisa's been pretty coy about where things stand on their relationship status, but Jorge decided to spill the tea.

Some might say he's engaged in some PRE-breakup hotness -- because Jorge dropped a whopping 128 pounds during his time behind bars. The transformation was obvious in his most recent mug shot.

He's now 190 lbs -- down from 318 lbs -- and says he mixed regular cardio and intermittent fasting to cut weight. He says he wants to put on muscle once he's out of the joint. He's gonna be a single guy, after all.

Considering all the gyms are closed right now and for the foreseeable future ... he might want to take advantage of prison yard workouts while he can. 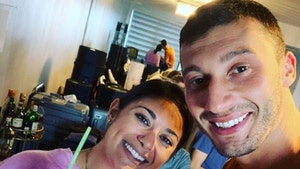