Not only is Christian McCaffrey an NFL mega-star who's dating a flaming hot supermodel (hi Olivia) ... he's also doing his part to help out during the coronavirus pandemic.

The Carolina Panthers star running back just announced the launch of his "22 and You" COVID-19 relief program -- which will raise money to support front-line medical workers including physicians, nurses and other hospital staff throughout the Carolinas.

The 23-year-old -- who wears #22 -- says he felt compelled to take action after watching these heroes risk their own lives to save others.

"I am moved by the heroic and selfless efforts of our frontline healthcare providers throughout the Carolinas and beyond. As such, I have decided to launch an effort to help them in their life-saving work."

CMC says he's teamed up with his partners at Lowe’s Home Improvement and Bose -- both companies are making significant donations -- and the funds will be directed to the North Carolina Healthcare Foundation and South Carolina Hospital Association Foundation.

Christian says he will match the donations from those companies -- which is a pretty big deal considering he's still in the middle of his 4-year, $17 million rookie contract.

Props to CMC and be safe people. 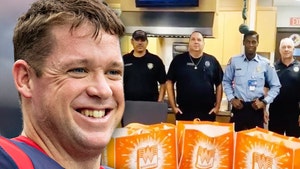