Conor McGregor is going after Khabib Nurmagomedov again ... this time blasting The Eagle for "chickening out" of his UFC 249 fight with Tony Ferguson later this month.

"The fact of this matter is, both Tony and Khabib where engaged in a game of chicken here towards the fight bell," The Notorious said Thursday. "With Khabib chickening out first."

Of course, this is the FIFTH time the Khabib-Ferguson fight has been canceled over the years ... and Conor is now deeming Tony the winner after Khabib's latest withdrawal.

"Khab scurried out of the U.S to home, and amid the crisis. Very high risk," McGregor said. "Congrats Tony."

Nurmagomedov clearly ain't laughing at Conor's ribbing ... the UFC star said Wednesday he had legitimate concerns about fighting amid the coronavirus pandemic.

In fact, Khabib expressed frustration over the pressure he's been receiving to fight.

"Famous people around the world urge people to follow all safety requirements in order to limit the spread of the disease," Khabib wrote, "to save people, and Khabib is the only one relieved of all obligations and must demonstrate free will and train flying around the world, for the sake of fight?"

Khabib added that he was super disappointed ... but it ain't like Conor cared.

"I am in shape to fight right now!" McGregor said. "At the beginning of all this, I said to myself -- I’m happy I don’t have an official fight booked."

"If I did, I would have consumed all the incorrect data to support me taking part in the bout, and I would have followed through, competed. And won."

The last time Conor fought Khabib back in 2018, it wasn't even close -- the Dagestani dominated McGregor and ultimately got him to tap out in the 4th round.

As for UFC 249 (still scheduled for April 18), Dana White has been adamant the show will go on -- but it's still unclear who will fight and where it will be held. 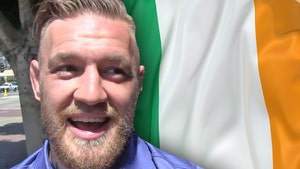 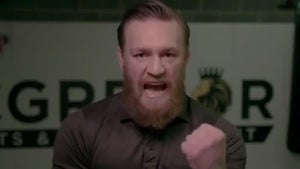