Ed Orgeron is calling things off with his wife, Kelly ... the LSU head coach filed for divorce a little more than a month after he led the Tigers to a National Championship.

The 58-year-old filed the court docs in Louisiana back on Feb. 26, according to The Advocate ... and in them, he says he and Kelly officially split on Feb. 24.

Orgeron and Kelly raised three sons together ... including twins that they had on Feb. 9, 1998.

Orgeron had praised Kelly several times during LSU's championship run this past winter ... and had called her an inspiration multiple times in the years leading up as well.

In fact, the two were inseparable during Orgeron's victory celebration over Clemson on Jan. 13, sharing kisses and hugs as confetti rained down at the Superdome.

In the divorce filing, Orgeron says he wants exclusive use of the couple's home in Baton Rouge ... and claims to have no objection to letting Kelly have their house in Mandeville, La. until court proceedings mete out their situation. 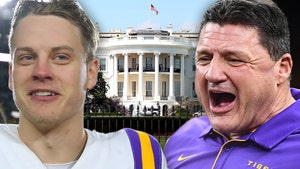