It's official ... Justin Gaethje will replace Khabib to fight Tony Ferguson in the main event at UFC 249 on April 18!!!

So, many questions remain -- like where will the event take place -- but so far, that's all we know.

There will be a fight. It will be live on ESPN+. Tony and Justin will fight for the UFC interim lightweight title (Tony previously held it, but was stripped when he injured his leg. Khabib then fought Al Iaquinta for the interim title).

As for the location, Dana White has only teased it will go down "somewhere on EARTH!"

No matter where the fight takes place, the UFC will most likely restrict fans from attending due to the COVID-19 pandemic.

Unclear who will call the fight.

As we previously reported, Khabib Nurmagomedov was all set to fight Tony -- but he's stuck in Russia and unable to fly out.

So, the UFC locked in Gaethje -- one of the most ferocious strikers in all MMA -- to go after Tony instead.

White has said there will be other fights on the card, but he has not revealed the names of anyone else signed on yet. 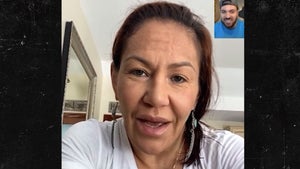 Cyborg Says Next Fight Will Be Boxing Match, Not MMA