Ronaldinho -- the soccer superstar accused of using a fake passport to enter Paraguay -- is finally out of jail ... but he ain't exactly home free.

The 40-year-old Brazilian was moved to house arrest Tuesday -- after spending the last month locked up in Paraguay for allegedly using a really bad fake passport.

As we previously reported, Dinho and his brother traveled to Paraguay back in March to promote a new book -- but officials say they entered the country illegally. Big problem.

And, why fake passports? The former FIFA World Cup All-Star reportedly had his Brazilian and Spanish passports confiscated in July 2019 over unpaid taxes.

Authorities raided the hotel where Ronaldinho and his bro were staying, seized the passports and threw 'em both in jail ... where they've been ever since, until Tuesday.

Bond was set at $1.6 MILLION ($800,000 each) -- which they can easily afford, considering the FORTUNES they made in contract and endorsement money over the years.

Don't feel too bad for Ronaldhino, he's been able to stay active in jail ... dominating in rec yard soccer games and reportedly winng a trophy pig for his performances!

Ronaldinho and his brother are expected to remain under the house arrest while an investigation into their alleged crimes carries on.

Besides playing for the Brazilian national team, Ronaldinho also played for Paris Saint-Germain, Barcelona and A.C. Milan during his epic career. 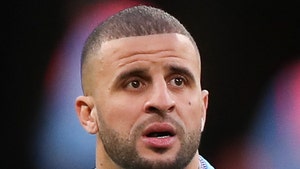