George Floyd appeared to be getting roughed up in the back of a police car shortly before he was pinned and killed -- and a new angle shows one cop was definitely standing watch.

The new surveillance footage -- obtained by activist Shaun King -- shows what happened after George was led away by Minneapolis police after he was cuffed and detained from across the street. This seems to show what happened right before George was taken out of the car and forced to endure the weight of 3 grown men on top of him ... which ended with Derek Chauvin as the last man kneeling on his neck, costing him his life.

Now, we see that something hectic was happening in the back of the SUV officers had Floyd in -- it looks like two officers on the street side had their door open, as did one officer along the sidewalk ... and they were all moving about frantically, which appears to indicate some type of physical altercation taking place. The 4th officer stands watch nearby.

Eventually, they get George out of the car -- and, well, we've all seen what happened next. What's crazy about this is that the one guy who was assigned as lookout clearly sees the surveillance camera that caught all this ... as he looks directly at it for a brief second.

He's also got his head on a swivel, making sure no one else is around or videotaping.

As you know by now ... all four cops here lost their jobs, and one of them has been arrested and charged with murder and manslaughter. These two newest videos showing what role the other officers played leading up to George's final breaths are quite revealing though.

Unclear what, if anything, they might lead to ... but if prosecutors and officials haven't seen this footage by now, they might wanna take a hard look. 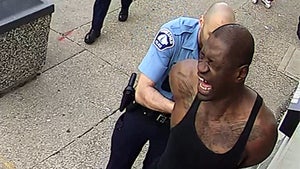