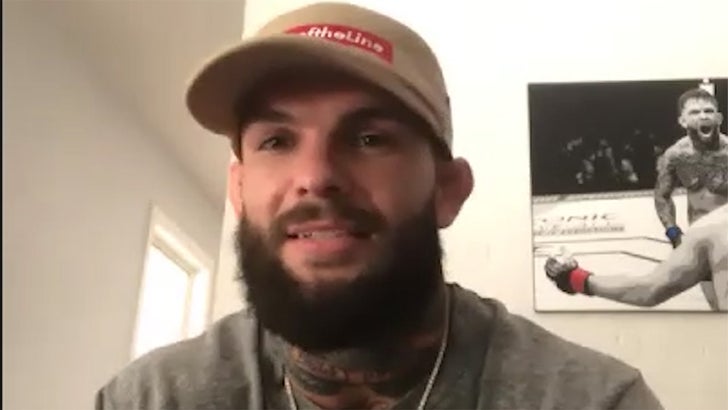 "Mine was way better. Way vicious. My dude couldn’t get up."

That's Cody Garbrandt spelling out why his violent walk-off knockout of Raphael Assuncao at UFC 250 was better than Sean O'Malley's KO ... and yeah, they take this stuff seriously!

No Love reached back and smacked the daylights out of Assuncao with just seconds left in the 2nd round ... sensationally ending his 3 fight losing streak.

"I knew that as soon as I started that punch, the trajectory of where it was going, the force and the speed, it was going to connect and knock him out," Cody tells TMZ Sports.

"It was a picture-perfect punch and just a nice walk off."

Earlier in the night, O'Malley finished Eddie Wineland with a 1-hitter quitter of his own.

Both Cody and Sean got $50k performance bonus checks from the UFC ... but we had to ask the question -- which KO was more impressive?

Garbrandt's breakdown is pretty great ... explaining that his opponent is "leap years ahead of any adversary [O'Malley] has ever fought."

"Hats off to him. He did good, went out there and performed, got a knockout victory ... but you can’t compare when you’re fighting the Top 5 in the world."

"[O'Malley has] never fought anybody in the Top 15, so that’s a huge difference when you’re able to starch people like that at each level."

We also asked Cody if that punch was hardest he's ever hit anyone -- and got another great answer.