Lil Jon just took CRUNK to a whole 'nother level ... with the rap legend joining a pro Trophy Truck driver for the most INSANE joyride you'll ever see!!!

But, don't worry, everyone was wearing a helmet.

The "Turn Down For What" hype man joined 2020 Baja 1000 winner Alan Ampudia for a drive through the streets of Ensenada in Mexico ... and it's equally awesome and terrifying.

The duo -- with Jon in the passenger seat, obvi -- zoomed through the streets of the city, twisting and turning at every curve ... and even coming within inches of the edge of cliffs.

Ampudia even makes his own path and does some WILD jumps ... all while Lil Jon is trying to keep his cool (spoiler alert: he doesn't).

FYI -- Ampudia is one of the best drivers in the extremely dangerous industry ... he's a 2-time world champ, so Jon was in great company.

Once the boys made it to their destination safely, Lil Jon gave his Uber review -- saying, "That s**t was crazy. I got a different respect for y'all motherf***ers being in the car now. Y'all do this for a whole day!?"

Nice to see everyone made it through in one piece!! 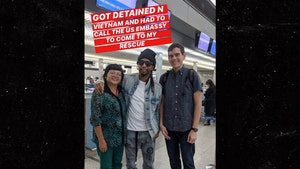 Lil Jon Says He Was Detained in Vietnam Over Jewelry