Dwight Howard is officially IN for the NBA restart -- saying he will rejoin the Lakers in the bubble environment in Orlando ... and will donate the rest of his season's salary to charity.

"Yes, I will be joining my team in Orlando," Howard said Monday on "CNN Tonight."

"I have a contractual obligation to my teammates, to my fans, the Lakers, the organization and everyone -- but at the same time, I also have an obligation to my family and to my community."

Los Angeles Lakers center Dwight Howard says he will be playing when the NBA resumes its regular season. "Yes, I will be joining my team in Orlando." pic.twitter.com/L77KhRYSec

Howard is reportedly set to make around $700,000 in contract money for the remainder of the 2019-20 season -- but says every penny will now be directed to Breathe Again, the social justice initiative he started back in 2015.

“I’m going to use my salary ... All the money, the paychecks I’ll be getting down in the bubble, to help push this ‘Breathe Again’ movement and just make sure people don’t forget about what’s going on in our society.”

Howard appeared on CNN from his home in the Atlanta-area -- where he's reportedly been taking care of his 6-year-old son ever since the child's mother passed away after suffering an epileptic seizure at her Calabasas home back in March.

There had been questions about whether Howard would play or sit out to focus on his family ... but now, those questions are answered.

Howard later explained "Breathe Again" -- saying his "plan of action" includes rolling out programs "to cultivate an environment so that the youth can breathe freely and be confident in every facet of their lives."

"Breathing new life into the community is something I am very passionate about. As I've said before, whether basketball and/or community, I am prepared to go the distance for the win." 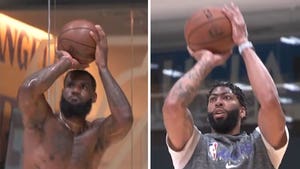