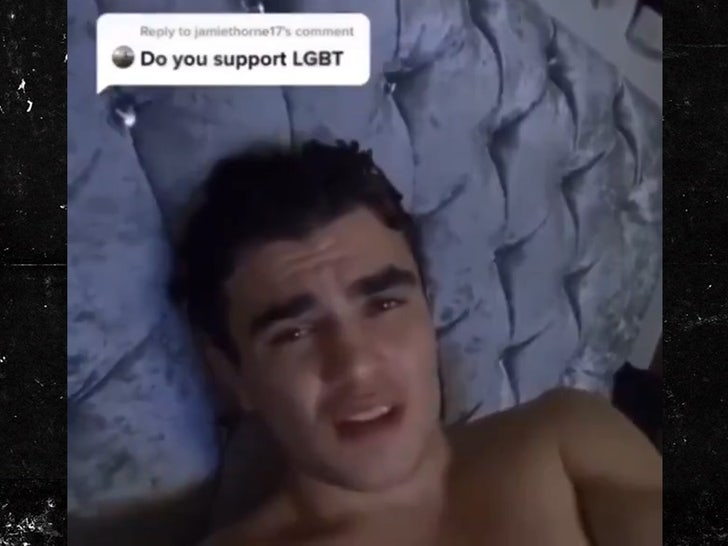 An undefeated pro boxer was AXED by his management company Wednesday after the fighter went on a disgusting homophobic rant on TikTok.

Meet James Hawley ... a 21-year-old fighter from the U.K. -- he's 6-0 and was signed with MTK Global, which reps huge boxing stars like Tyson Fury, Carl Frampton and Billy Joe Saunders.

Hawley decided to do a little Q&A on TikTok recently and was asked, "Do you support LGBT?"

His response ... "I one-thousand, one-million percent do not agree with this stuff."

What a renaissance man, right?

Hawley continued to spew a bunch of super offensive and graphic stuff that we're just not going to include in this article.

He ended with, "I feel sorry for your families."

The rant caught the attention of a "RuPaul's Drag Race U.K." star named Baga Chipz -- who reached out to MTK Global to find out why they would represent someone with such a hateful message?

To MTK Global's credit, they responded to Baga Chipz almost immediately -- saying they cut ties with Hawley after seeing the clip.

"The management team have made the decision to terminate Mr. Hawley's contract with MTK Global with immediate effect and will no longer be representing him in any format."

"MTK Global does not in any way condone, or support the views that were shared in any way, nor will these comments ever be considered as acceptable from any of our fighters hence the decision that was made by management."

After his release, Hawley made a video addressing the move -- and sort of (but not really) apologizing.

Yesterday professional boxer #JamesHawley responded to a question “do you support the LGBT community” instead of either ignoring the question or just saying yes he went on a viral tirade. This is his “apology” video after being let go from his management pic.twitter.com/0wkb9LXskc

Hawley's defense is that he was being sent graphic photos and videos from gay people and lashed out in a fit of anger.

Hawley says he is the victim of abuse by those people -- and isn't backing down.

Of course, Hawley also offered up the "I have gay friends" excuse.

We reached out to MTK Global to see if they'll listen to Hawley's explanation -- so far, no word back.

You Might Want to Rethink LGBT Boxing TMZ Sports