One of the most vile, disgusting displays we've seen in a long time went down in Nokomis, Florida, when a white supremacist spewing his love for Trump and hatred for others violently attacked a woman.

The self-proclaimed Aryan and white supremacist, Nicholas Arnold Schock, went on a rampage inside a restaurant and began screaming, "I'm a white supremacist, Aryan Nation will rule the world. People covered in tattoos are gonna be my closest relatives, I promise you."

Someone at the restaurant asked him to pipe down because kids were present, to which he responded ... "I don't give a f***, call Donald Trump, please."

And then, he hurled some disgusting obscenities, and as he tried to make his way inside a female staffer blocked him, and then, with all his might, unloaded a punch to her face.

The crowd clearly had enough, tackling the guy and taking him to the ground.

Schock was arrested and charged with battery and disturbing the peace. He's still in custody. 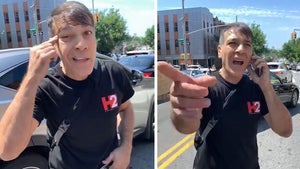 You Might Want to Rethink Insane Videos Fights Viral