As if 2020 couldn't get any weirder ... the Minnesota Twins vs. Pittsburgh Pirates game was paused Tuesday afternoon -- and it's all 'cause a drone flew over the field.

The scene was wild ... in the middle of the fifth inning, umpires pulled players off the diamond when they noticed a flying object cruising high above Target Field in Minneapolis.

The drone hovered over the ballpark for several minutes -- causing a lengthy delay in the game.

Of course, drone flying over ballparks during play is illegal even without fans in attendance -- the FAA still prohibits it -- and MLB was obviously worried about player safety.

No one was hurt, however ... and the unmanned aircraft eventually left the scene and play resumed. 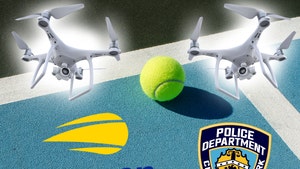