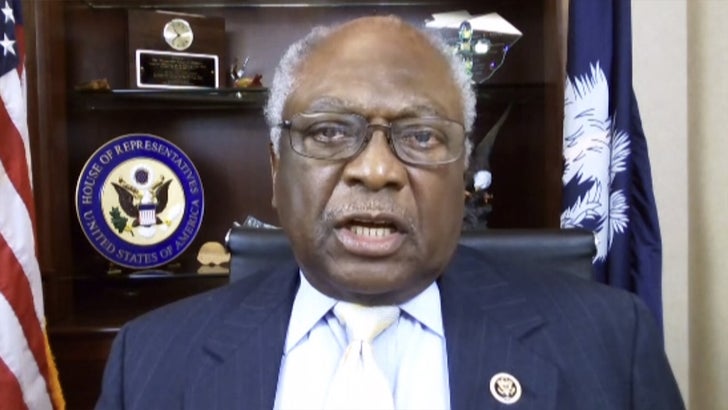 Rep. Jim Clyburn's adamant that President Trump is dead serious about remaining in office -- whether or not he wins the election -- and says it's not out of the question that military leaders will have to remove him from The White House.

The South Carolina congressman and third-ranking Democrat in the House made headlines this week when he responded to Trump's call to delay the November election by saying ... "I feel very strongly that he is Mussolini. Putin is Hitler."

Clyburn's sticking to that, and in our "TMZ Live" interview he compared Trump's tactics to those of a fascist leader ... who wants to remain that way for life. He says there have been talks about Trump refusing to leave, and there will be more as the election gets closer.

He points out Trump has already stated this in the past "jokingly," but Clyburn believes he means it ... and history has shown what can happen if it's not taken seriously. Coincidentally, Trump just tweeted a campaign video suggesting he's not joking either.

So, what happens if Trump loses, but refuses to accept it? Rep. Clyburn admits he doesn't have the answer yet -- it would be unprecedented after all -- but it's clear ... lots of people on the Hill are plenty worried.

Clyburn tells us he believes government officials and military leaders have already seen how Trump has misused and abused his power -- with his use of force to dispel peaceful protesters in Lafayette Park for a photo op coming to mind -- so they'll be ready.

And, if they need ideas on how to get Trump out of the WH ... they already know tear gas and rubber bullets work pretty well, don't they?