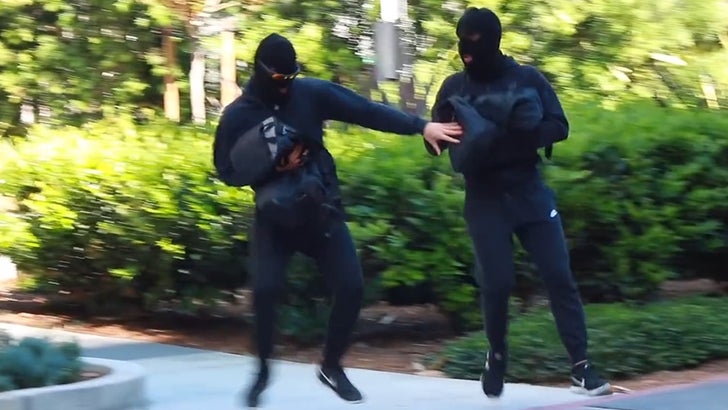 YouTube stars Alan and Alex Stokes are in very real trouble for allegedly faking a series of bank robberies ... they've each just been hit with a felony charge.

Authorities say the twin brothers, who have 4.81 million subscribers on their Stokes Twins YouTube page, staged a pair of fake bank robberies in Irvine, CA back in October, one of which resulted in an unsuspecting Uber driver being held at gunpoint by police.

The twins have each just been charged with one felony count of false imprisonment plus a misdemeanor count for falsely reporting an emergency.

The Orange County District Attorney says the twins pretended to rob a bank, dressing in all black and wearing ski masks while carrying around duffle bags full of cash, and called for an Uber while their videographer filmed from afar.

Officials say when the Uber driver pulled up, the twins climbed in the vehicle, but the driver refused to drive them and was unaware of the prank. The D.A. says a bystander called police, believing the two men had just robbed a bank and were attempting a carjacking.

Video of the prank shows the twins getting out of the car ... and the D.A. says when Irvine police arrived they ordered the Uber driver out of the car at gunpoint. He was released after cops determined he was not involved in the prank.

The video shows the twins getting a warning from an officer ... but the D.A. says 4 hours later the brothers pulled the same kind of prank on campus at the University of California, Irvine, and police again received emergency calls about a bank being robbed.

The D.A. is not laughing ... calling the alleged fake robberies "some kind of twisted attempt to gain more popularity on the Internet by unnecessarily putting members of the public and police officers in danger."

If convicted on all counts, the twins face a maximum sentence of four years in state prison.