2:38 PM PT -- Fort Collins Police Services has shed a bit more light on who they arrested and why -- saying they took action against members of both parties ... while apparently chastising the pro-cop group's methods.

The agency says it arrested four different people in connection to Saturday's brouhaha -- booking them on charges from criminal tampering and resisting arrest to disorderly conduct and possession of an illegal weapon. They didn't specify which suspects were affiliated with which groups -- but did note they made arrests on both sides of the fight and are looking for other troublemakers that got away.

The FCPS also says ... "We respect everyone's right to peacefully assemble. Our officers have consistently supported these rights in recent months as people have gathered to make their voices heard. For the safety of our community, acts of violence and other unlawful behavior have not and will not be tolerated from anyone."

Then comes the telling line ... "Truly supporting a cause means representing its values. Committing crimes in our community is not a way to support police. We stand for safety, period. We want all of our community members to feel safe here in Fort Collins and we reject any form of hate." That seems to be a shot at the pro-police group, many of whom were seen on video throwing down, arguably more so than the BLM crowd was.

The group -- Back the Blue -- was holding a rally in Fort Collins, Colorado Saturday when some Black Lives Matter protesters showed up.

It appears the Back the Blue crowd went after the BLM protesters, and you hear someone shout, "Everybody keep their hands off their weapons. Keep punching each other in the face. Don't shoot anybody."

Someone from the BLM group said, even though they were not the aggressors, they were detained by cops but were never told why. 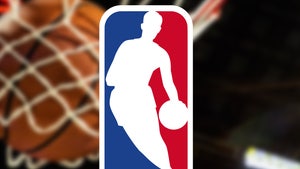