The Baltimore Ravens are donating $1 MILLION to combat social injustices ... and the team's star players are deciding who gets the cash.

A players council -- consisting of ex- Ravens WR Torrey Smith, and current stars like Ronnie Stanley and Justin Tucker -- selected 28 local organizations who are each getting a share of the money.

The organizations range from a group that uses dirt bikes to eradicate poverty (B-360) to a program that provides mentors for kids in Baltimore (Challenge 2 Change).

"When you talk about social justice, there are many different issues – from education, to criminal justice reform, to health," Smith says.

"There are so many avenues the players could have chosen, so they really spread it out among a lot of different grassroots organizations."

"I'm passionate about this, knowing the position I'm in and how blessed I am to be in a position to help people," Stanley says.

"I'm not going to forget about the people who are dealing with things that aren't fair. We have an opportunity to help make the world a better place, and I want to take advantage of that."

Many NFL teams and players -- including the league -- have stepped up in a big way in the wake of George Floyd's killing ... donating huge amounts of money.

The NFL committed a whopping $250 million over the next 10 years to "address criminal justice reform, police reform and economic and educational advancement for African Americans."

Saints star Drew Brees is throwing down $10 mil to build healthcare and community centers in the New Orleans area.

Now -- thanks to team owner Stephen Bisciotti's donation -- a bunch of groups in the Baltimore area will have thousands of dollars to fight for equality. 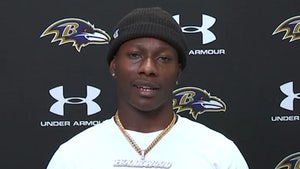