The UK's first major outdoor concert is offering a glimpse of what's likely to become the norm -- venues sectioned off into small groups, enabling fans to rock without rolling the COVID-19 dice.

Take a look ... the outdoor venue's setup includes 500 separate seating sections with metal barricades, which are for groups of 5 to attend and watch the show.

Tickets reportedly sold out immediately, and photos and videos from Fender's concert show the crowd cheering and singing along ... responsibly from their own sections.

This, of course, is in stark contrast to carefree concertgoers in the U.S. packing venues to see Chase Rice in Tennessee, The Chainsmokers in New York, an EDM party at Lake of the Ozarks and most recently ... to watch Tech N9ne in Missouri and Smash Mouth at the Sturgis Motorcycle Rally.

Fender's concert is the first of many more scheduled in upcoming weeks -- Van Morrison and Maximo Park shows are coming up -- and are expected to implement similar COVID precautions. 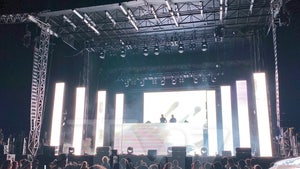