Jay-Z, Yo Gotti and their social justice team allege Mississippi's infamous Parchman prison is coming up way short in protecting inmates from COVID-19 ... and stats prove it.

Team's ROC's lawyers filed docs this week accusing the state penitentiary of serious testing failures on the heels of reports of a coronavirus outbreak among just a small sample of inmates.

According to the docs ... as of July 30, only 132 Parchman prisoners of more than 2,000 had been tested for COVID, and among those 132 a whopping 33 percent tested positive, suggesting an impending crisis.

Team ROC claims cases continue to rise instead of decrease, and point out that one inmate just died from the virus last weekend.

To make matters worse, the prison's allegedly failing to isolate infected inmates and ROC claims 3 prisoners who had tests pending were recklessly moved to different units with no precautions ... and their results came back positive.

Team ROC claims the prison staff also comes up short on its screening process for visitors and says staff members don't universally wear PPE ... causing concern that attorneys and other outsiders may have been exposed.

Team ROC attorney Marcy Croft says ... "It’s a travesty that Parchman continues to neglect the lives of the people in their prisons and expose them to the deadly COVID-19 virus."

Along with better testing protocols and compliance, the legal team is looking for more transparency from the prison, to ensure it's following CDC guidelines to slow the spread.

This isn't the first time the notorious Mississippi penitentiary's been called out for alleged mistreatment of its inmates. As we reported ... Team ROC released a video in January of what it described as inhumane conditions inside its walls.

Yo Gotti even asked the feds to intervene, and Team ROC also filed a lawsuit against prison officials demanding a plan of action to help the inmates. 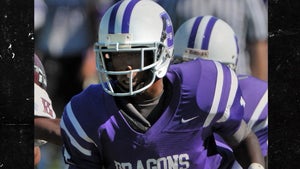