Frightening moment during the Miami Heat and Indiana Pacers game ... when forward Derrick Jones, Jr. had to be stretchered off the court following a hard collision.

Jones -- the 2020 Slam Dunk champion -- collided with Pacers player Goga Bitadze in the second half of Friday's matchup ... when the center set a pick that sent DJJ to the ground.

Thoughts and prayers are with Derrick Jones Jr., who was wheeled off the court after a collision on a screen. pic.twitter.com/fXhzbmPyrZ

Reporters on the scene say Jones, Jr. was lying face-down on the court for several minutes before he was put on a stretcher with a neck brace.

Jones -- who grabbed his neck as soon as he started falling to the ground -- was chasing forward Doug McDermott as he collided with Bitadze's shoulder.

No word on Derrick's status ... but here's hoping he's okay.

Jones has had a breakthrough season for the #4-seed Heat ... averaging 8.6 points a game. 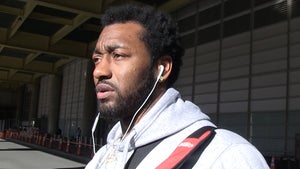 John Wall Gives Injury Recovery Advice, Take It From Me!