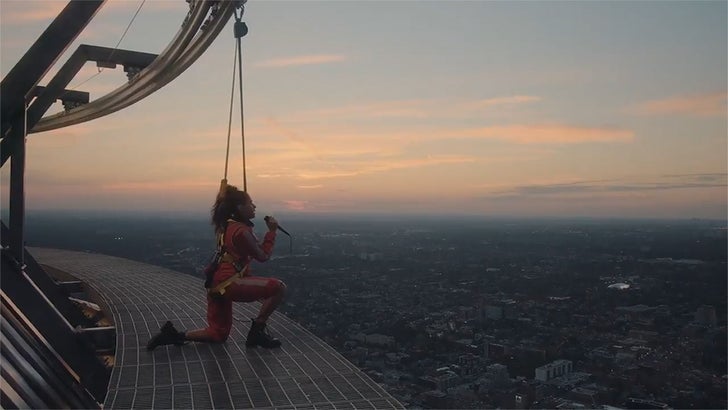 Grammy-nominated singer Jessie Reyez just took a knee atop the CN Tower for the singing of "O Canada" before an NBA playoff game Monday ... and the video of the performance is powerful.

The Toronto Raptors posted the footage just before their tilt with the Brooklyn Nets ... showing Reyez on one knee singing the Canadian national anthem while locked into a harness at the top of the famous building.

Reyez' rendition of lasted for nearly 2 minutes ... and the shots of her on the ledge of the 1,800-foot-tall building were breathtaking.

You can also see in the video, she's wearing a mask around her neck that reads, "Breonna Taylor."

Of course, the 29-year-old's kneeling -- which went on for the duration of the song -- is clearly a showing of support for Colin Kaepernick in the fight to shine a spotlight on police brutality and social injustice.

In the NBA bubble, meanwhile, players and coaches continued with their demonstrations during the anthems ... with Raptors and Nets locking arms and kneeling on the court while Reyes' song played.

As we previously reported, the NBA has made countless efforts this summer to raise awareness for racial equality ... including suspending the rule that forced players to stand for pregame anthems.

President Trump has spoken out strongly against the kneeling demonstrations -- saying he will not watch the games as long as the league allows players to (in his words) "disrespect our flag."