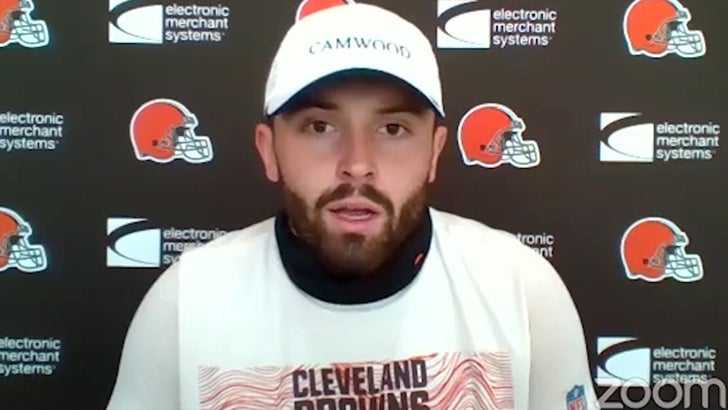 Baker Mayfield is holding firm to his promise to kneel for the national anthem ... saying he's proud to use his platform to speak out for human rights.

Remember, the Cleveland Browns QB clapped back at a fan who begged him to NOT take a knee this upcoming season ... saying, "pull your head out. I absolutely am."

During a virtual media session Friday, Bake was asked if he regretted going public with his kneeling plans because of social media backlash he received afterward.

"I don't have any regrets," Mayfield says. "I think being in my position, which is a blessing, to be out on a platform where I can speak on issues that ... they're just wrong."

"Right is right, wrong is wrong. This is a human rights issue that's been going on for a long time and I believe in that."

#6 continued ... "It's nothing against military, anybody who served. And anybody who knows my history knows that I completely support military and the people that serve our country for the right reasons and do it for justice."

Mayfield isn't all talk -- he's shown serious love for those who have protected the country over the years ... and even met with every single member of the military who attended Browns training camp in the past.

Baker's also helped the Browns send a bunch of care packages to the military in 2019 ... so yeah, the dude does a lot more for the troops than what some anti-kneelers will ever do.

Mayfield is on a list of many NFLers who plan to kneel in 2020 -- from Washington's Adrian Peterson to Texans coach Bill O'Brien.