The frontrunner to fill the late Justice Ruth Bader Ginsburg's seat on the Supreme Court -- if Donald Trump gets his way -- has all the signs of voting to repeal Roe vs. Wade.

The 48-year-old jurist currently sits on the 7th Circuit Court of Appeals and is a committed strict constructionist of the Constitution, meaning she interprets the document as the framers intended. That's code these days for saying abortion is not mentioned as a right in the Constitution, therefore the right does not exist.

Barrett, a devout Roman Catholic and mother of 7, told Senators during her confirmation hearing for the Court of Appeals ... her religion would not, pardon the expression, trump the Constitution ... presumably trying to give assurance that she would not overturn Roe based on her religious beliefs. Nevertheless, there's evidence she's opposed to abortion.

She's been against ObamaCare's birth control mandate, calling it a "grave violation of religious freedom."

Barrett clerked for the late Justice Antonin Scalia, a fiercely conservative, strict constructionist. She was a professor at Notre Dame School of Law for 15 years before her appointment by Trump in 2017 to the 7th Circuit.

She was in the running to replace Justice Anthony Kennedy's seat back in 2018 and many conservatives favored her. Trump ultimately went with Brett Kavanaugh.

If Barrett gets the nod and is approved by the Senate, conservatives were be cemented on the High Court with a 6-3 majority. It could mean the end of ObamaCare and Roe, and that's just for starters.

Some Democrats have already suggested if Trump gets another justice appointed, they will move to stack the courts by increasing the number of justices. Some political strategists have warned ... talk of court-packing could hurt Democrats because it would motivate Trump supporters to get out and vote, even if Trump's nominee gets confirmed before the election. 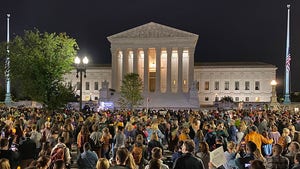 Massive Memorial for Ruth Bader Ginsburg As Elizabeth Warren says, 'I Will Fight'