"Just when you thought you were ready to spit on the grave of the Dallas Cowboys, that's when we raised our hand up and said, 'We're not dead yet!!!'"

Michael Irvin went INSANE breaking down his former team's epic comeback victory over the Atlanta Falcons ... and his impassioned speech is MUST WATCH!!!

Irvin went on NFL Network on Sunday night to talk football just a few hours after the Cowboys came back from down 26-7 to beat ATL, 40-39 ... and the former WR let his emotions fly!

"Just when you were ready to SPIT ON THE GRAVE OF THE DALLAS COWBOYS, THAT'S WHEN WE RAISED OUR HAND UP AND SAID 'WE'RE NOT DEAD YET!! AND WE'RE STILL IN THIS THING" -Michael Irvin

Ya gotta watch the clip ... Irvin gets so fired up over the win -- he straight-up has to tell himself on camera, "Calm down, Michael! Calm down!"

As for the game ... it probably deserved the reaction from Irv -- the Cowboys not only needed to make up a 19-point deficit, but they also needed a miracle onside kick to do it.

Turns out, Dallas did both things ... and Irvin and just about everyone else in the NFL world couldn't believe it!!

In fact, even Charles Barkley had to chime in on the game while was doing his NBA on TNT show ... saying the Falcons choked it all away!!

Chuck felt the pain after the Falcons loss today 😅 pic.twitter.com/fr9SlJJv3W

"They outdid themselves today," Barkley said of Atlanta. "That was the biggest choke job, what the Atlanta Falcons did today. I'm not giving the Dallas Cowboys any credit. That was a choke job!" 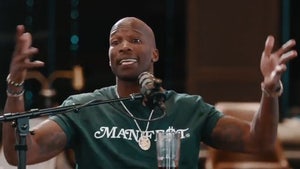 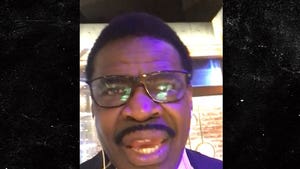 Michael Irvin Raves About DK Metcalf, Could Be NFL's Next 'Elite' WR!