There's nothing nasty going on between Christina and Ant Anstead since their split -- in fact, the "Flip or Flop" star's remained in the home they shared and they're still keeping in touch.

Sources with knowledge of the situation tell TMZ ... Ant recently moved out of the Orange County estate he and Christina had lived in together since 2018, while she's still living there.

As we reported ... Christina announced her separation from Ant in an Instagram post Friday, and since then we're told the former couple has been in constant contact because they're co-parenting their 1-year-old son.

Our sources say the split wasn't caused by anything scandalous ... we're told nothing malicious happened between Christina and Ant, they had just grown apart since getting married nearly 2 years ago.

While our sources say the estranged couple's still trying to work on things, it's unclear if they'll get back together.

Christina's already back at work -- with her ex, Tarek El Moussa -- they recently shot "Flip or Flop" episodes, and we're told she's also shooting the 3rd season of her own show, "Christina on The Coast." 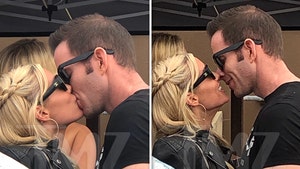