Edgerrin James will be riding in STYLE to the Hall of Fame ... TMZ Sports has learned he's tricked out a classic car for the special occasion -- and it's DOOOOPPEEEE!!!

We're told shortly after Edge learned of his HOF selection this past February ... he handed off a 1975 Chevy Caprice to a body shop in Florida to get it Canton-themed.

The owner of the body shop tells us damn-near everything on the car is new ... from the HOF wrap job to the 28-inch gold Dayton Wire Wheels.

We're also told the shop replaced the engine with an LS3 supercharged Corvette motor ... so the thing is pretty AND fast!!!

The shop's owner says James is already thrilled with the ride ... and is planning to take it to his induction ceremony -- which has been rescheduled to next August due to COVID.

From there, the shop's owner says James will have the rest of the inductees sign the car ... and then the former Indianapolis Colts great has plans to auction it off.

Unclear where the proceeds will go ... but something tells us it's gonna sell for a helluva lot!!! 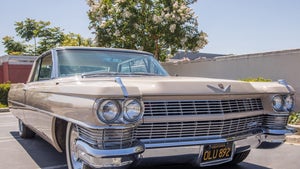