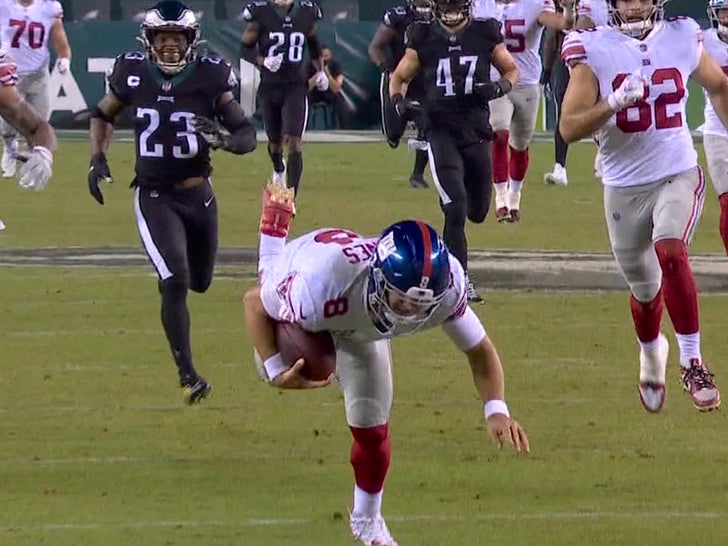 Yep, NY Giants QB Daniel Jones tripped over his own two feet Thursday night while heading for a wide-open end zone while playing the Philadelphia Eagles.

Jones had taken off from his own 12-yard line and quickly found daylight -- tucking the ball and sprinting 80 yards with ZERO defenders in the area to stop him!

All he had to do was walk the final 8 yards and he would've scored a TD -- but he lost his footing and came crashing to the ground.

Everyone watching had to pick their jaws up off the floor and shake their heads.

Even announcer Joe Buck couldn't believe it -- "He trips! Absolutely all alone and he trips going to the end zone!"

"A walk-in touchdown and he tripped himself!"

Don't worry, the Giants eventually scored a TD on that drive -- with Wayne Gallman punching in a 1-yard run that gave NY a 14-10 lead at the time. They did end up losing 22-21 to the Eagles.

The trip and fall was a hit on social media -- where fans and NFL players clowned Jones for the goof.

Buffalo Bills WR Stefon Diggs even got in on the jokes ...

🤔 He tripped the same way people do in scary movies when they running from the villain/bad guy ...

Patrick Mahomes didn't clown Jones -- explaining, "I mean i can’t even say anything cause i would never be able to run that far either."

... Still better than the Jets.