Andy Dalton was knocked out cold by an absolutely BRUTAL hit in the Dallas Cowboys' game Sunday ... but, thankfully, the team says he's now feeling better and "in good spirits."

Dalton lay motionless for several seconds after taking a violent shot to the head in the third quarter of Big D's blowout loss to Washington ... and the scene was SCARY.

Andy Dalton is done for the day and so is Jon Bostic after this hit. pic.twitter.com/uNn569V9fM

WFT linebacker Jon Bostic hit the 32-year-old QB with a shoulder to the forehead while Dalton was sliding ... and the shot was so vicious, it caused Andy's helmet to fly off.

The quarterback needed help from trainers to get off the field and back into the locker room ... where he was diagnosed almost immediately with a concussion.

But, despite the frightening scene, a Cowboys spokesperson told the team's official website Sunday that Dalton was "alert, in good spirits and feeling much better."

Dalton is now in the concussion protocol ... and he'll need to clear tons of different tests to continue to move forward as the Cowboys' starter this season.

As for the hit itself, Bostic was ejected over the play ... and Cowboys coach Mike McCarthy said he was pissed none of Dalton's teammates went after the guy for the hit.

"It definitely was not the response you would expect," McCarthy said.

Dalton's replacement in the game, rookie Ben DiNucci, is expected to be Dallas' starter on Sunday night if AD is not ready to go.

Dak Prescott, meanwhile, remains months away from returning to the team after he suffered a gruesome ankle injury earlier this month. 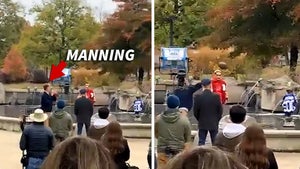 Peyton Manning Hits Beer Cans Off Statues With David Letterman, Still Got It!