Arizona Cardinals star safety Budda Baker was wearing a hot mic when his pick-6 got spoiled by D.K. Metcalf's insane chase down tackle ... and the hilarious audio has finally been released.

.... and it's everything we could've hoped for and more!!

"How'd he catch my ass, what the (expletive?!?!)," a winded Baker said as he approached the sidelines ... completely bewildered by the Seattle Seahawks receiver's insane speed.

Of course, the 2nd quarter INT was the talk of the night as the Cards upset the 'Hawks in OT, 37-34 ... and Budda had to show love to D.K. on Twitter following the game for sprinting 90 yards to keep him out of the end zone.

"DK HAWKED MY ASS... #RESPECT," Budda said on Twitter ... while teammate DeAndre Hopkins added, "And we Hawked them."

Of course, the trash talk was all in good fun ... but the audio just goes to show how Budda was as shocked as we were to see him get caught. 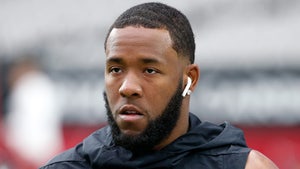