Spectacular Blue Smith was busted for allegedly punching a Disney World worker ... who told cops he tried to block Smith for fake sneezing and joking about coronavirus.

The Pretty Ricky rapper was at Walt Disney World Animal Kingdom Monday night where he allegedly pretended to sneeze before saying, "coronavirus." According to the police report, a Disney World employee didn't think the stunt was funny, and told SBS as much. But, the rapper allegedly responded, "I thought it was."

The report says the employee then tried to get the rapper to get out of the line ... saying, "Then you'll think it's hilarious if I asked you to step out of line." When SBS refused, the employee allegedly put his arm out to stop the rapper from moving.

That's when, according to the police report, Smith punched the employee on the right side of the jaw/temple area. For what it's worth ... cops say Smith's son told them his dad "lost his balance falling to the ground" while trying to duck under the worker's arm ... and when he reached out for something to grab, "accidentally punched [the worker] on his face."

Police say the employee told them he was in shock and thought he lost consciousness. The staffer was taken to a nearby hospital -- turns out he suffered a concussion.

According to police, there were witnesses who heard SBS and the employee's exchange. Cops say there were others who witnessed the rapper allegedly punch the employee. Smith was arrested for battery. He posted $500 bond.

Spectacular Blue Smith took to Instagram after the incident ... saying, "The more success you have as a black man, the bigger target you are." He said there are 2 sides to the story and said he'll wait for his lawyer's go-ahead to give a full account of his side. He ended his post with "Y'all know my character." 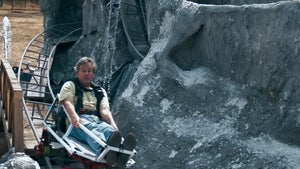 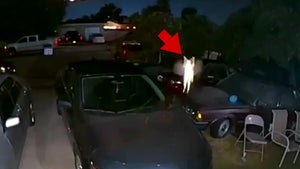