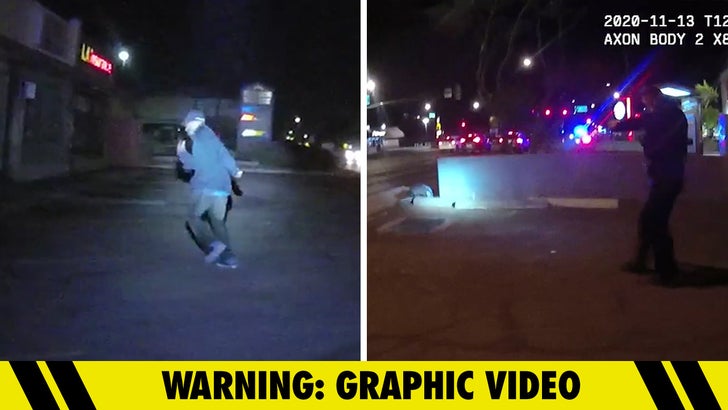 Newly released body cam footage shows cops in Arizona chasing an armed man -- who appeared to be suicidal -- and then gunning him down.

The intense video shows cops running after the man who was allegedly assaulting a woman when Phoenix PD showed up. During the Nov. 13 incident, the 2 officers noticed he had a handgun and repeatedly yelled for him to stop and drop the weapon.

The man continued running away from cops, and pointed his gun at his own head as he fled. Things finally came to a critical point as he walked quickly toward a busy street while still brandishing the gun. The officers fired 3 shots and he instantly hit the deck before being taken into custody.

He reportedly suffered gunshot wounds to his back and leg and his father claims cops shot him twice when he was already down. You can judge for yourself by watching the video.

Cops say they gave the man medical aid right after shooting him and transported him to a hospital, where he remains hospitalized and will be booked on multiple felony charges when he's released from care.