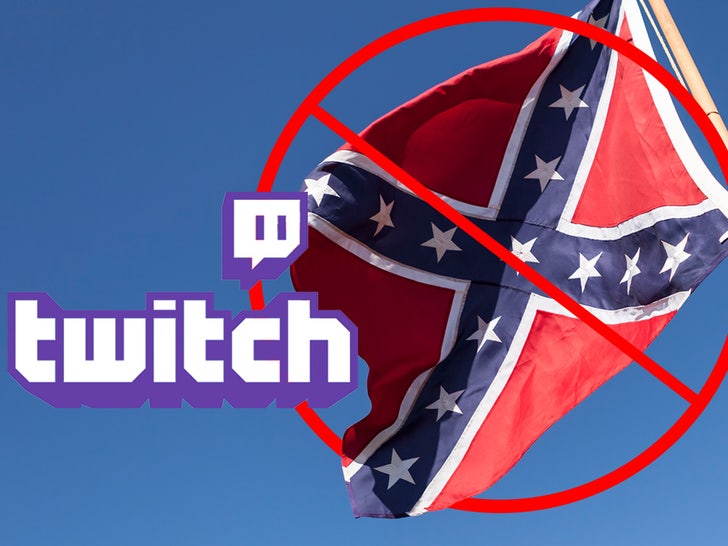 Twitch -- one of the biggest live streaming gaming platforms on the planet -- is following NASCAR's lead ... and officially BANNING the Confederate flag.

The streaming giant announced its updated Hateful Conduct and Harassment Policy will go into effect on Jan. 22 ... in hopes to sustain a more inclusive environment.

"Communities on Twitch are diverse and are growing rapidly, representing nearly every interest, background, and language around the globe," Twitch said in a statement Wednesday.

"As we evolve, it’s necessary to revisit and update policies to make sure all streamers and all communities can create together safely on Twitch."

The platform added ... "We know that many people on Twitch -- particularly women, members of the LGBTQIA+ community, Black, Indigenous, and people of color --unfortunately continue to experience a disproportionate amount of harassment and abuse online, including on our service."

"Not only is this blatantly unacceptable, it also undermines the community we’re building on Twitch and threatens the long term viability of streaming as a career for everyone who wishes to pursue it."

Twitch specifically notes the Confederate flag will not be allowed on its platform, citing its "historic and symbolic association with slavery and white supremacist groups in the US."

As we previously reported ... NASCAR announced its decision to ban the Confederate flag after Bubba Wallace publicly called for its removal from events ... saying, "No one should feel uncomfortable when they come to a NASCAR race."

Among other prohibited actions on Twitch include repeatedly making unwelcomed comments on a user's attractiveness or sexuality, as well as sending unsolicited nude pics and videos.

Twitch is also reiterating its ban on black/brown/yellow/redface "unless they are being used in an explicitly educational context."