Tom Brady beat a Brees and then scored with one later ... 'cause after the Buccaneers superstar bounced Drew Brees from the playoffs Sunday -- he threw a TD to the QB's son!

The cool moment all went down an hour or so after the Bucs beat the Saints in the Superdome in an NFC Divisional Round game ... with Brady and Brees having what appeared to be a pretty emotional talk.

Brady gave Brees (who had just finished likely the final game of his historic career) a handshake and a long hug ... and then suddenly Brees' son came up to the two.

As Tom Brady and Drew Brees hug and say goodbye after a long talk on the field, Brady throws a touchdown pass to Brees’ son. One walks off to play in the NFC championship, the other stays to play with his kids. pic.twitter.com/wdWDro9YD4

The young Brees handed a ball to Tom -- and TB12 knew exactly what to do with it!!!

The Tampa Bay signal-caller fired a perfect strike into the corner of the endzone ... and the little Brees came down with a pretty impressive catch!

"That a boy!" Tom told the kid. "We could have used you tonight. Got to get that ball in the endzone!"

Brees' wife then gave Tom a hug ... and Brady provided some strong words of wisdom to Drew's other son -- "Be nice to your sister." Tom then bolted for the locker room.

Of course, the whole moment was super special ... Sunday is almost certainly the final time the two legends will compete on the same field again -- so it was cool to see the two G.O.A.T.s go out like this. 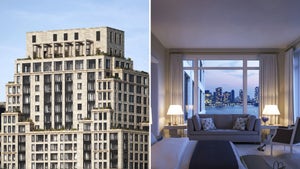 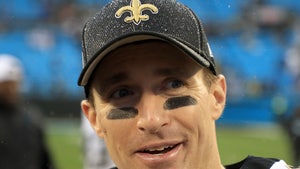 Drew Brees Returning From Rib, Lung Injuries to Start for Saints, Despite Pain