11:27 AM PT -- President Barack Obama released a passionate statement on the late legend ... praising him for being an icon and leader on and off the diamond.

"Whenever Michelle and I spent time with Hank and his wife, Billye, we were struck by their kindness, generosity and grace -- and were reminded that we stood on the shoulders of a previous generation of trailblazers."

"Today, Michelle and I send our thoughts and prayers to the Aaron family and everyone who was inspired by this unassuming man and his towering example."

Hank Aaron was one of the best baseball players we’ve ever seen and one of the strongest people I’ve ever met. Michelle and I send our thoughts and prayers to the Aaron family and everyone who was inspired by this unassuming man and his towering example. pic.twitter.com/2RZdc82Y18

"I was lucky enough to spend time with Hank on several occasions during my career and have always had the deepest respect and admiration for all that he did both on and off the field."

"He is an icon, a legend and a true hero to so many, who will be forever missed."

"Hank Aaron -- thank you for everything you ever taught us, for being a trailblazer through adversity and setting an example for all of us African-American ballplayers who came after you."

"Being able to grow up and have the idols and role models I did, helped shape me for a future I could have never dreamed of."

9:01 AM PT -- The Atlanta Braves say they're "absolutely devastated" by the death of Aaron ... calling him a "beacon for our organization."

"His incredible talent and resolve helped him achieve the highest accomplishments, yet he never lost his humble nature," the MLB org. said Friday.

"Henry Louis Aaron wasn't just our icon, but one across Major League Baseball and around the world. His success on the diamond was matched only by his business accomplishments off the field and capped by his extraordinary philanthropic efforts."

Hank Aaron -- one of the greatest baseball players of all time -- has died. He was 86.

The Hall of Famer reportedly passed away Friday morning. We're working on the details.

Hammerin' Hank is widely considered one of the greatest baseball players of all time -- he famously broke Babe Ruth's home run record of 714 in 1973.

During his legendary career, he made 25 All-Star teams and won the NL MVP in 1957.

Aaron made his MLB debut when he was only 20 -- launching a 23-year career that would go down in the record books.

He retired from playing in 1976 and was inducted into the Hall of Fame in Cooperstown in 1982. He's also in the Atlanta Braves Hall of Fame and the team retired his #44 uniform.

In fact, he's such a legend in Atlanta ... the city's mayor said Friday his death is nothing short of devastating.

"While the world knew him as 'Hammering Hank Aaron' because of his incredible, record-setting baseball career," Keisha Lance Bottoms said, "he was a cornerstone of our village, graciously and freely joining Mrs. Aaron in giving their presence and resources toward making our city a better place."

Among his many career highlights, a World Series victory in 1957 -- the same year he won National League MVP. He also won 3 Gold Gloves, 2 NL batting titles and led the NL in home runs in 4 separate years.

Hank finished his career with an unreal 755 home runs -- a record that lasted decades until Barry Bonds broke it in 2007.

Aaron was a hero right up until the end of his life -- earlier this month, Hank and his wife Billye went to the Morehouse School of Medicine in Atlanta to get their COVID vaccine shots in the hopes of inspiring other Black Americans to follow his lead. 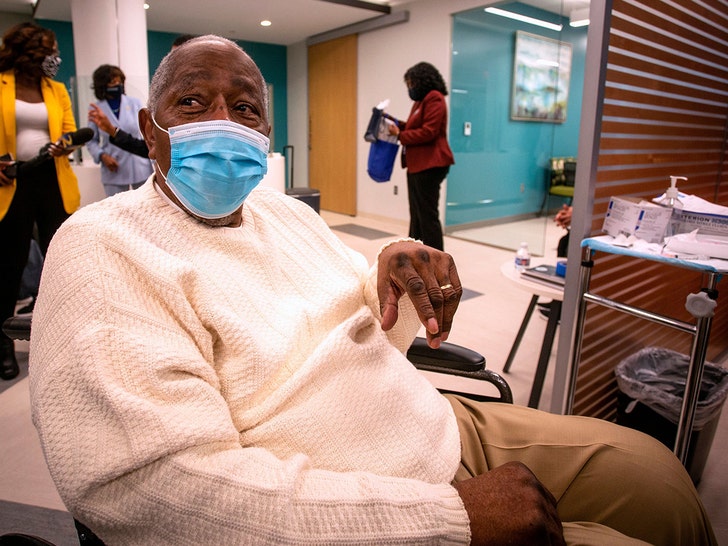 Aaron started off in the Negro Leagues, signing with the Indianapolis Clowns in 1951. He played with the team for 3 months -- earning just $200 per month. He signed with the Atlanta Braves in 1952 and kicked around the minor leagues until 1954.

Superstars from sports, entertainment, politics and more are paying tribute to Aaron …

"Rest in Peace to American hero, icon, and Hall of Famer Hank Aaron," Magic Johnson said. "I still remember where I was back in the day when he set the record, at that time, to become the home run all time leader."

"While a legendary athlete, Hank Aaron was also an extraordinary businessman and paved the way for other athletes like me to successfully transition into business. Hank Aaron is on the Mount Rushmore for the greatest baseball players of all time! Rest In Peace my friend."

Added Bill Russell, "Heartbroken to see another true friend & pioneer has passed away. [Hank Aaron] was so much better than his reputation! His contributions were much more than just baseball. Jeannine & I send our prayers & deepest condolences to his wife & kids."

Heartbroken to see another true friend & pioneer has passed away. @HenryLouisAaron was so much better than his reputation! His contributions were much more than just baseball. Jeannine & I send our 🙏🏾 & deepest condolences to his wife & kids. #RIPHammeringHank #RIP @MLB @Braves pic.twitter.com/ONO49xEOKQ

Legendary MLB slugger Frank Thomas also issued a statement on Twitter, writing, "I’m speechless! RIP to the greatest of all time Mr. Hank Aaron!! I’m just stunned. Hank was the standard of greatness for me. The one man who I acted like a kid around star struck always! He was the definition of class! God Bless you and your family!!"

Mike Trout added ... "You were and are an inspiration to be a better person on and off the field. We lost a true LEGEND of the game today... #RIPHankAaron 🙏🏼"

Cal Ripkin, Jr. shared his condolences, saying, "I’m saddened to learn of Hank’s passing. He was a giant in our game and inspired so many on and off the field."

"What he endured and how he persevered to surpass the all-time HR record, thought to be unbreakable, was remarkable. My thoughts are with his family and @Braves fans."