Canelo Alvarez and Billy Joe Saunders are fighting in front of a MASSIVE crowd Saturday night, but promoter Eddie Hearn says you should NOT worry about Covid ... 'cause there are precautions in place to keep fans safe.

The fight's going down May 8 at AT&T Stadium in Texas -- where there are no restrictions -- and will likely be the most attended event in America since the pandemic struck early last year.

"We're gonna be just under 70,000. So it's gonna be incredible," Hearn says ... "I think I remember seeing Canelo box Liam Smith and it was about 40,000 people there and the atmosphere was just absolutely insane. This is gonna be a very, very special atmosphere." 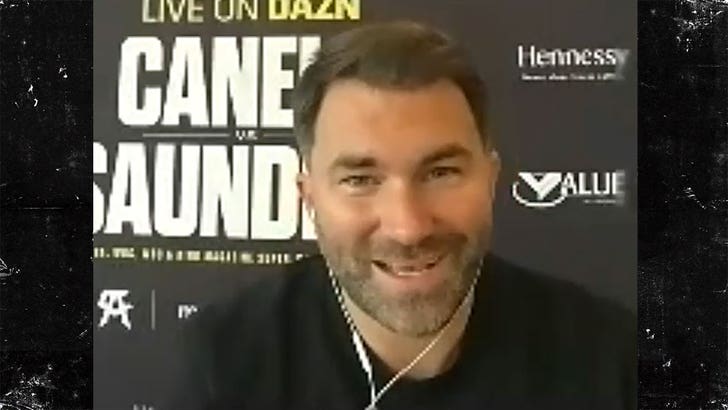 Some people have said packing the building with fans is a bad idea ... so we asked Eddie to address the situation.

"We're not the first in terms of big numbers returning to Texas. All sports now have been bringing crowds back. You've seen no spikes because of that," Hearn says.

"There will be masks worn, mandatory, on Saturday night. I've noticed, to be honest with you, as a Brit coming into states that have opened up like Texas and Florida, people aren't going out there care-free and just ignoring rules."

"People are actually being sensible and they will be Saturday night, and everyone will have a safe night."

FYI, AT&T Stadium AKA Jerry World is huge ... it fits about 80k with room for over 100k with standing room.