"The McGregor Clan is now a family of 5," Conor posted with a picture of the little guy ... "Healthy baby boy delivered!"

"God I thank you for everything you give to me and my family in this world."

McGregor doesn't have too much time to bond with the kid before training camp begins -- he's fighting Dustin Poirier at UFC 264 on July 10 ... less than 2 months away.

Conor's having a pretty huge month -- he was just named the #1 top-earning athlete of 2020, according to Forbes, which says CM raked in $180 MILLION last year!

In other words. CONGRATS RIAN -- YOU WERE BORN INTO SOME SERIOUS MONEY!!! 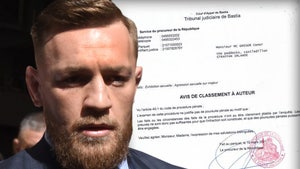