Conor McGregor wasn't stopped by COVID or a Dustin Poirier loss, 'cause the UFC superstar was the world's highest-earning athlete in 2020 ... reportedly raking in $180 MILLION!!

The 32-year-old earned a whopping $22 million for his UFC 252 2nd-round TKO loss to Diamond, but according to Forbes annual list of the World's Highest-Paid Athletes ... it was the whiskey money that carried McGregor to the top spot on the list.

Conor earned $158 million outside the Octagon ... and an overwhelming majority of that cash came from his sale of Proper 12 Irish Whiskey.

This marks the first time McGregor -- consistently one of the highest-paid athletes -- has topped the list.

In 2018, The Notorious came in 4th ... earning $99 million -- largely from his superfight with Floyd Mayweather.

As far as the remainder of the top 10 ... there are 3 international soccer players, 2 NBA players, 2 NFL QB's, a race car driver and a tennis player.

What's funny ... back in 2016, Conor joked with then highest-paid athlete, Ronaldo ... telling the soccer superstar that he was coming for the #1 spot. 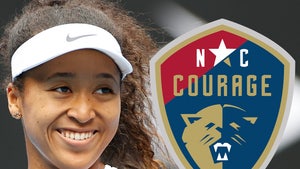