Another non-boxing star wants a crack at the Paul Bros -- The Game is calling 'em both out and GUARANTEEING victory!!

FYI, The Game is 41 years old and has no pro boxing experience -- but he's been in a ton of street fights over the years and seems incredibly confident in his hands.

Someone on Twitter warned The Game about the call out -- "you and your brother game are gonna be like Nate Robinson don’t do this bro."

"Hate it or love it you would get knocked the f**ked out."

Logan is currently training to fight Floyd Mayweather -- but Jake is looking for his next opponent.

Let's see if they can make a deal! 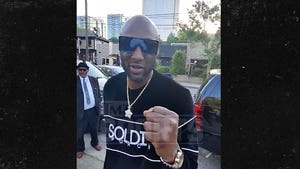